The motivation and sheer stupidity of Hans Blix was always crystal clear to us here at the “Markowski Monthly.” This past month “Mr. Magoo” gave a classic interview on highly respected news network MTV.

“I lived through the whole Cold War and the risk then, the mutually assured destruction, the “M.A.D.,” as it was called, that was very much a reality for us, that the world could be blown to pieces all together with the nuclear weapons that they had in Russia and the United States. I don’t think that anyone seriously fears that the world can be blown to pieces all together. But what one can fear and rightly so are regional things, like in the Middle East, India, Pakistan, the Korean Peninsula, borders in Africa, etc. We need to have patience in order to try to solve these conflicts as well. Like I said, I’m more worried long term about the environmental issues then the use of arms.”

This idiot belongs on MTV. Yo! Hans Blix Raps! The world according to Blix states that Global Warming is a bigger threat than terrorists’ high jacking airplanes, crashing them into buildings and murdering thousands of civilians. Global warming is a greater threat to mankind than terrorists with sarin, ricin, VX, or anthrax. Let’s all breathe a collective sigh of relief and thank God that Hans’ fifteen minutes are up.

In another display of great ignorance, I give you none other than former Secretary of State, Madeleine Albright. Miss Albright is a classic two-faced political hack whose outspoken critique of the Bush administration consistently contradicts prior statements and actions. This past month she showed her true colors with this classic statement:

“The United States can’t exist without the United Nations and we have put ourselves above institutions like the U.N.”

Can you believe that we had a Secretary of State that actually had a higher regard for a useless diplomatic assembly than the Constitution of the United States that she swore to defend and uphold? This country will never subordinate our safety, freedom, and interests to a bunch of overpaid blowhards. Through the great efforts of Marxists, Socialists, radical Islamists and an array of other immoral characters, the very United Nations that we built has become irrelevant. A few examples: Syria is on the Security Council, Iraq is in charge of weapons proliferation, Libya is in charge of human rights. The United Nations must be overhauled or banned. There needs to be a law that states that in order to be a part of the U.N. general assembly, a country must be a type of democracy. How can a country be afforded the same privileges a democracy bestows when it denies to its own countrymen rights? Miss Albright, we are well above the U.N. and your desire to sink this great country to its level is criminal.

Last but not least, never to be outdone is former President Bill Clinton. Good ole Bill drew standing ovations from the 92nd Street YMCA on the Upper East Side in Manhattan. For those not familiar with the Y, we have discussed its nursery school and its involvement with stock manipulators Jack Grubman, Sandy Weill and Citigroup. The overall discourse at the Y sits somewhere left of Lenin. It is the Manhattan center for all “useful idiots.”

“Right after winning U.N. Security Council support in November for weapons inspections, the White House “sent 150,000 troops to the gulf, which convinced everybody we weren’t serious about U.N. inspections. That’s how we got into this political mess.”

Clinton never asked for U.N. permission to fire 400 cruise missiles at Iraq. Second, we wouldn’t be involved in most of this mess if you, Mr. Clinton, displayed some real leadership during your tenure. Bill Clinton governed by opinion polls and brushed difficult problems and decisions under the rug. His “kick the can down the road” policies were precursors to September 11th and North Korea.

Bill Clinton went on to state…

“The U.S. should be strengthening the U.N. and other mechanisms of cooperation. We need to be creating a world that we would like to live in when we’re not the biggest power on the block.”

Holy Benedict Arnold!! Can you say traitor? Our previous Commander and Chief wants a world where we are not the strongest country. Maybe that’s why he sold our missile technology to China? We called Bill Clinton’s office in Harlem to ask who he feels we should turn our power over to. They declined comment. 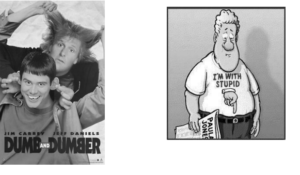